As the curtain falls on City’s most memorable campaign for a decade, I look back at the best bits of this fairytale season.

How nice it was. How nice it was to know that the worst-case scenario was a seventh crack at League Two, and not extinction. How nice it was to not be constantly compared to Leeds and Huddersfield. How nice it was to have a group of players who understood, who never gave up, who hounded every ball and who – in one instance – literally shed blood for the cause.
And how unpredictable has it all been? In the top three, out of the top three. In the cup, out of the cup, into the same cup that we’d just been kicked out of, out of that cup (again) and into a cup final. In the play-offs, out of the play-offs, way off the pace, a wee bit closer to seventh, then back in with a bang as the season’s epic conclusion came down to the wire. Mad stuff.
As the campaign closes, I’ve decided to take a look back at the key moments of City’s season – the season in which the Bantams burgeoned into the side that we’d spent five years dreaming of. Expect Wembley appearances, penalty triumphs and giant-killings aplenty.

Bradford City 5-1 A.F.C. Wimbledon:
City romped to a stunning victory over the division’s strugglers, with Wells, Davies, Hanson and McArdle all slotting home before the break to send the Wombles packing.
The Bantams hadn’t been on the right end of a result like that in a long, long time, and it was incredible. As a City fan who had been through the whole rigmarole of a promotion bid converting itself to relegation battle more times than I dared to count, I was cautiously optimistic, daring to dream but nonetheless trying to keep things in perspective. The Bantams crashed back down to Earth with a bump at the hands of the Millers the following week, but, even then, it was difficult to ignore this start to the season and the quality of players that Parkinson had drafted in. A team is only ever as good as the sum of its parts – but Parkinson had clearly crafted something very special here.
This had to be our year. It was long, long, long overdue…

Bradford City 1-1 Arsenal (Bradford win 3-2 on penalties)
I’ll never forget December 11th, 2012 and the build up to it: how chants blasted out through the corridors at school, the excitement as people clamoured to get tickets and the banter with all of the Arsenal fans in my class. I was actually sat next to a Gunners fan at the game (my brother’s friend). Did that stop me from screaming madly when City scored? Definitely not, and, to be honest, I think that our little guest was secretly quite pleased for us.
Moreover, nothing could have prepared me for the sight of Valley Parade that night. I’d never seen the stands so full and it was probably the best atmosphere ever. Garry Thompson’s goal, the Arsenal blunders, the chants of “Premier League? You’re having a laugh”… It all just meant so much, and, best of all, City hung on in there, kept calm and took it to penalties. Last season, we were struggling to beat Barnet and Torquay, yet here we were, condemning the Gunners to a humiliating cup exit.
In the car on the way home, we joked about Bradford getting to the final and the possibility of competing in Europe, blissfully unaware of how one of those prospects would be dramatically realised.

Bradford City 3-1 Aston Villa:
We all know the story. Villa pressed us, but Wells coolly slotted home, followed by a thunderous McCardle header. Paul Lambert’s side bounced back, but Carl McHugh directed a Gary Jones cross past his boyhood hero to cap off one of the most remarkable nights ever for the Bantams.
As Bradford fans, we were probably more incredulous than Paul Lambert: how had City, the same team who hadn’t been able to score for toffee less than a week ago, managed to put three past Aston Villa? And not only that, but outplay them for 90 minutes?
Wembley rested just one game away.

Aston Villa 2-1 Bradford City (Bradford win 4-3 on aggregate):
It was a snowy night in Villa Park. Four great, hulking stands looked down over the frosty pitch as a plethora of claret and blue flags were waved madly in the stands, almost foreshadowing the actions of the Bantams fans at the final. Not that we were to know that. At this point, it just seemed as though the Birmingham club were trying everything to intimidate Phil Parkinson’s men.
Initially, it worked. Bradford were tentative and struggled under Villa’s early pressure, with Benteke taking advantage of a congested box to score early and give Paul Lambert a flicker of hope. However, James Hanson emerged as the hero of the match, firing a header past Shay Given to permanently etch himself into Bantams’ folklore.
The ecstatic City fans entered into a rendition of “Que, Sera, Sera”, and that said it all: we were going to Wembley.

Wembley I: Bradford City 0-5 Swansea City:
Here it was. Bradford’s date with destiny. The outing to the national stadium that we’d never expected. Make a day of it. Why not a weekend? Relish this experience, because trips to Wembley don’t come around often.
As far as I was concerned, it was written in the stars. I looked back at the number of times that City should have gone out of the cup, but didn’t: when Notts County rattled the crossbar in the First Round; when Gerviniho fired wide from a few feet out; when Darren Bent headed the ball miles over an open goal; when Stephen Ireland’s equaliser was flagged as offside. Every time, Lady Luck was on the Bantams’ side, and I was sure that she’d be there again to help the team out in the cup final.
But reality had different ideas.
Swansea were ruthless. Their clean, crisp, precise passing was simply impossible to contest, and the Wembley stage left the Bantams with nowhere to hide. It was the first time that Bradford had ever wavered, ever looked like a side from the fourth division, but it didn’t matter: they had done us proud, and I’m pretty sure that the 30,000 flag bearers did their heroes proud, too.

Back to the League, where the Bantams’ form had dipped – perhaps owing to fatigue from the mammoth number of fixtures. Following the 4-1 drubbing to Exeter that had left Bradford 8 points adrift from the final play-off place, many supporters had written off a promotion, but we didn’t mind because we’d had that amazing, amazing cup run. But that wasn’t good enough for Parkinson and his boys: they needed to fulfil their prime aim.
City slowly closed the gap to cement a spot in seventh, before clawing back a one-goal deficit to brush aside Burton Albion in the second leg. We were heading back to Wembley. Bradford were on the brink of doing what, after five dismal years, had begun to seem nigh on impossible.

Wembley II: Bradford City 3-0 Northampton Town:
As holiday homes go, Wembley’s not a bad one to have the keys to. This match proved why.
It was a different ball game to the Capital One Cup final. This result mattered more, for one, and both teams were on a level playing field. Whilst causing only a ripple on the international pond, the pressure was massive, because we had to go up, had to get out of the doldrums. Please, please, please.
It really was the perfect end to our fairytale. Hanson, the local boy who had been working at a Co-op store when City signed him, saw his effort power past the Northampton goalkeeper to open up the scoring, and Rory McArdle and Nahki Wells added to City’s tally to clarify the result.
“We are going up!” we boomed, utterly delirious. You can say what you like about the play-offs - how they’re not fair, how they’re too tense, how they’re too risky - but, believe me, when it’s your captain who is climbing the Wembley stairs to lift that coveted trophy, you’ll agree that there really is no better way to go up.

Before this season, I didn’t even know what “Que Sera, Sera” was, I’d had so few reasons to sing it.
Now, it’s up there with my favourite football chants, right alongside “Stephen Darby, baby”, “He’s magic, you know” and “DUUUUUUKE”.
That is more than what I could have ever expected from this season. 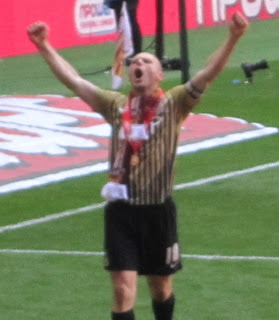 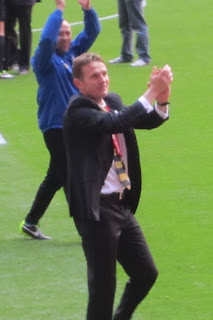