Welcome To The Hotel California

Football fandom and other stuff 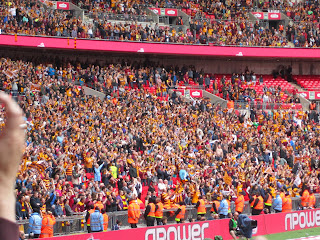 No one gives you a handbook on how to be a football fan.
There’s no advice on who to pick, who to cheer on, who will grace you with unbridled joy, and who will drag you through the entire spectrum of negative emotions and leave you blasting the futility of it all. In fact, as football fans, we’re a relatively helpless species: we can’t do what the players can, and mark number seven or tackle number ten, and our team is often picked for us by family. And we’re lumbered with the club – you can’t break the unwritten rule and switch allegiance.
But even those who have the ‘luxury’ of selecting their own club don’t seriously consider it, do they? Do we? You don’t sit down with a list of the football clubs in the UK and calculate which one you’ll get the most joy out of supporting. Want a team that’s on the up? Choose Swansea City, who are making waves in the Premier League thanks to the iconic passing ethos engrained in the culture of a club – a passing ethos that, commendably, transcends any manager and crop of players. What about a team with billionaire owners that could buy any player at the drop of a hat? Look no further than Manchester City. Looking for a test of faith and resolve? A certain all-conquering Premier League team could be the club for you, though I’m sure the thrill of telling irate armchair supporters to find a bit of perspective will wear off after a while.
Nobody sets out a criterion for selecting a team.
Because, I suppose, you can’t. You don’t realise how relentless the football fandom is until you’re completely entangled in its grip. By that time, it’s too late. You’re unable to escape, breathe, leave, switch off, forget about it, detach yourself. It’s like an addiction, manifesting itself through the constant supply of stats, match reports, analyses and debates. For the rest of your life, you’re tied to that team: for the ups, the downs, the indifferent. Players come and go- some converted to revered cult heroes and fawned over even after an apt replacement surfaces, some chased out the door quicker than you can shout “offside”- but you’re always there; your team is your constant, and vice-versa. You feel every goal, every kick, every pass, every touch, every minute of play ranking somewhere between pure devastation and pure ecstasy. To analogise it, it’s like the Eagles’ Hotel California: “you can check out any time you like, but you can never leave”.
I can’t imagine supporting anyone other than Bradford City, a sentiment I’m sure any Bantams fan would echo. Maybe that statement would have been written with a bit less conviction, two years ago. Or maybe it wouldn’t have. You’ve got to believe in the club and whatever they’re doing. That’s partly why the tides turn against managers so quickly. Promotion last year was made all the more sweeter because we did it the right way: we didn’t click our fingers and watch ourselves be lifted out; it was the sixth shot, with an intelligent manager and a group of passionate and hardworking players. Given longer, Peter Taylor probably could have cracked it, but would a promotion founded on long balls and uncreative play, have tasted as sweet? I doubt it.


I read Nick Hornby’s Fever Pitch a while ago, and it struck me why some older Premier League fans seem almost nostalgic for elements that era. Not because of hooliganism, racism and unsafe grounds, obviously, but because of that sense of exclusivity, of belonging. An over-commercialisation of football–the gloriously named Hull City Tigers, to name but one aspect – has created a glass ceiling in the Premier League, and a bubble of different exclusivity. I don’t envy Premier League fans at all, because, although they’re treated to a display of the world’s most prodigal football talent on an almost daily basis, what their world lacks is substance. Clubs like Barnet and Exeter may not exactly exude glamour, but at least they can never be branded superficial. It’s an honour the Premier League runs the risk of losing, if it hasn’t already, as it seeks to increasingly distance itself from the world of the regular fan. I have friends who might turn their noses up at League One and City, but there’s no club I’d rather be supporting. With that in mind, there’s only one rule for my team selection: they can’t be anyone other than Bradford City.
Posted by Bantams Blogger at 18:27